You are here: Home / Newsletter n.4

We start the new year with many important thinks to tell you!

Life HEROTile project goes on with the experimentation, and we are glad to talk you about the commitment of the municipality of Cadelbosco that has bet on the project.

In this Newsletter we will also read an interview with the university partner of the project, Prof. Giovanni Zannoni, University of Ferrara and we will see the presentation events of January of the super ventilated tiles: KlimaHouse Fair, in Bozen from 24th to 27th, and a workshop in Reggio Emilia on Monday 29th.

Remember! On Life HEROTile Official Website (www.lifeherotile.eu) you can read all the previous 3 newsletters and the very interesting interviews with the industrial partners: Fernando Cuogo from Terreal, Mario Cunial from Industrie Cotto Possagno, and Christian Pohl from Monier.

To subscribe to the Life HEROTile Newsletter and to be always updated regarding the developments of the project, please visit the dedicated page of the website of the project.

The Newsletter is not the only way to communicate and disseminate the results and the status of the project: if you are a fan of Social Networks do not forget to follow us on Facebook, Twitter and LinkedIn! 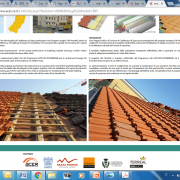 Acer Reggio Emilia (a social housing company, partner of the project) has identified in the Municipality of Cadelbosco di Sopra a building with an inhabited loft, ideal for the experimentation of the European project “Life Herotile”. Acer will carry out the necessary actions to implement this project. The mayor, Tania Tellini, has therefore made available the building (consisting of social housing and public offices) in addition to a loan of 27 thousand euros (as part of the total work cost of about 48,000 euros).

The object of the installation is a new tile, 100% made in Italy, with an innovative shape and a greater air permeability that in the winter season allows a better control of humidity, producing indirect benefits, thanks to the dryness of the insulating layers, favoring the dispersion of solar radiation by under-tile ventilation (video of the installation of the new Marseillaise tile in the municipality of Cadelbosco di Sopra).

A similar building, managed by the Sociedad Municipal Zaragoza Vivienda (the Spanish social housing company approved by Acer), is currently under experimentation in Zaragoza in Spain. (See the installation video www.lifeherotile.eu/installation-of-tiles-zaragoza).

Prof. Zannoni, you have been working on the “roof system” for 30 years, how did you come up with the idea of LifeHerotile Project and how your partnership with Prof. Bottarelli started?

The roof is a technical element architecturally very important and also functional as it constitutes the first fundamental shelter of the house. Many of my research articles are about the roof system and its correct construction: not only tiles but a set of elements, special pieces and accessories, chosen to best realize the entire roofing package, i.e. able to provide all qualities required to the correct functioning of the building. Among these functions, above sheathing ventilation has always been one of the most important, even though it is a technology not very well known.

In 1989 my team and I obtained from the Italian National Research Council a three-year funding within the “Progetto Finalizzato Edilizia” (Finalized Building Project) to study the mentioned above sheathing ventilation. The project Herotile is the result of our investigation. The idea came from an assignment by a clay roof tile company based in Israel that in 2011 asked us to research in deep the contribution of the ventilated roof in particularly hot climates. The turning point was this assignment as well as the meeting with Prof. Michele Bottarelli, a physical-technical colleague of the Department of Architecture at the University of Ferrara, who was able to develop a method that would allow verifying a series of hypotheses on the performance of the ventilated roof that I was considering since the “Progetto Finalizzato Edilizia”.

We initially calibrated the simulation software, used in the Israeli research, with real tests in the laboratory with a full-scale model provided with clay roof tiles; at the same time, we redesigned different configurations of the two roof tiles mostly present on the European market: the Portuguese tile and the Marseillaise tile (fig.1).

The projects were tested by a computer simulation with the new calibrated software and the solutions with the best performances were afterwards built by resin and tested in a wind tunnel. From all these tests came out the two best performing designs. These designs have been realized by some companies, members of ANDIL, and used for roofing some experimental buildings. There are four structures: two real buildings in Reggio Emilia (Italy) and in Zaragoza (Spain) testing the behavior of the new Herotile tiles in real conditions, and two experimental mock-ups, built in Yeruham (Israel) and at the TekneHub of the University of Ferrara, specially designed to compare the performance of the new tiles with the standard ones (fig.2).

Two more mock-ups with flat roof were also added for a comparison. The localization of the test sites is mainly the Mediterranean area, where the contribution of the ventilated roof for heat disposal can be more effective and important. The energy consumed for cooling is in fact now similar to the one for heating and the contribution of above sheathing ventilation to the summer cooling should lead to a reasonable savings with consequent lower CO2 emissions.

The partners involved in this project come from different European countries, to confirm interest in this research even from countries not directly facing the Mediterranean area. Germany, Great Britain, together with France, Italy and Spain and, as mentioned before, Israel, are present. 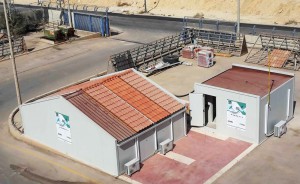 We accomplished the second year of this three-years long research in August 2017. The new Portuguese and Marseillaise Herotiles were manufactured industrially and placed on the sample buildings and their performance is being monitored since last summer. We are already able to observe better performance levels regarding ventilation and we are going to quantify them in terms of energy saving in the next months.

In 2018 the commercialization of these products will probably start and by the end of the research, we will also release a freeware software that will allow technicians and designers to evaluate a priori the benefits and the energy savings achievable with the implementation of these new roof tiles in a ventilated roof, compared to standard ones or other roofing solutions. Afterwards, ANDIL will divulgate these results and this software through its own website and the ones of its members.

In summer air conditioning consumes as much energy as for winter heating. However, it needs electricity, which is much more valuable than a primary source of energy such as methane. This aspect has been already tackled within the regions of the Mediterranean area but, due to climatic trends of these last few years, Central Europe will also be interested in these technologies for energy saving in summertime. Houses in Europe are mainly small building with pitched roofs. If we applied the ventilated roof technology with the new LHT roof tiles to a third of these buildings, we would save several tons of CO2 emissions. This would be the goal of the next years and for this reason the research partners come from the major European countries. Also, with the help of the European trade associations, TBE (Tiles and Bricks Europe) first (ANDIL is a TBE member), Federcasa and Housing Europe and other organizations and associations, we intend to broadcast the results of our research as well as the application of this technology. Afterwards it will be a matter of political choices and incentives. To give an idea of what could be the development promoted by incentives, if the HEROTile project was already on the Italian market and used in a block of flats, on the basis of the new tax incentives provided by the 2016 Stability Law, it would raise the percentage of reduction from 70 to 75% because it would allow to reach that particular case required by law which is the improvement of energy performance not only in winter season, but also in summer.

Where When What Life HEROTile January events: Fair and workshop

This month there are two important events with Life HEROTile!

Right now, at the fair of energy efficient and sustainable construction KlimaHouse in Bolzano (Italy), at the stand C19 / 42 – CD sector, there are several pieces of information about Life HEROTile projects with the documentation released by ANDIL (already partner of the project).

Save the date for Monday 29th! A workshop from the title “Life HEROTile: the super-ventilated tile for the best summer energy performance” there will be held in Reggio Emilia (Italy).

During the event there will be a presentation of the first results of the research and the show case of the new products.

This website uses cookies to improve your experience while you navigate through the website. Out of these, the cookies that are categorized as necessary are stored on your browser as they are essential for the working of basic functionalities of the website. We also use third-party cookies that help us analyze and understand how you use this website. These cookies will be stored in your browser only with your consent. You also have the option to opt-out of these cookies. But opting out of some of these cookies may affect your browsing experience.
Necessary Always Enabled
Necessary cookies are absolutely essential for the website to function properly. This category only includes cookies that ensures basic functionalities and security features of the website. These cookies do not store any personal information.
Non-necessary
Any cookies that may not be particularly necessary for the website to function and is used specifically to collect user personal data via analytics, ads, other embedded contents are termed as non-necessary cookies. It is mandatory to procure user consent prior to running these cookies on your website.
SAVE & ACCEPT
Scroll to top